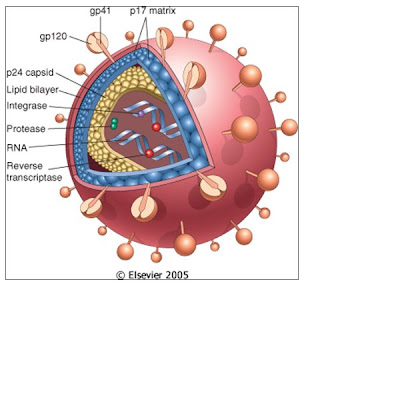 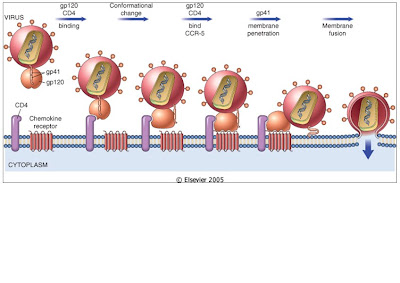 The figures above are from Pathological Basis of Disease by Robbins and Cotran.

The ABC lesson on HIV prevention teaches abstinence, being faithful to one partner and using a condom. We should analyse the relationship between HIV and the host to see how well we know our ABC lesson on HIV. The Art of War by Sun Tzu tells us, “If you know yourself but not the enemy, for every victory gained you will also suffer a defeat.”

Examination of the way HIV infects the body reveals some remarkable facts. The entire HIV spherical structure is called the virion. The actual virus or the dangerous, infective particle resides inside the virion as a cone-shaped core. It is surrounded by an envelope or coat, which may be considered to be equivalent to a condom. The release of the deadly virus from this protective sheath is afforded by a very intimate relationship between the invading virus and the host cell. (Refer to figures 1 and 2 as you read along).

Any virus, including HIV, will target only a particular type of cell rather than try to infect all the different cells of the body. Viruses are not as promiscuous as human beings. They want to live and they plan to continue being around for a very long time. A virus cannot reproduce by itself or by combining with another virus. It must find a suitable host to survive and proliferate, so it chooses its host wisely.

HIV infects the most important cell type in the body’s immune system. These are cells called T lymphocytes, a special type of white blood cell. This attack involves a process of attraction, fusion and penetration of the host. However, HIV does not simply and single-handedly violate the host. There is mutual interaction involving receptors on the host T cells fusing with HIV structures that are studding the protective sheath of the virus.

Truth to tell, the HIV virus displays a high degree of faithfulness to one partner by only having an intimate relationship with host cells that carry a particular receptor, called CD4. All of the other trillions of cells in the body without this CD4 receptor are ignored. These other cells are in abstention and cannot be infected at all. Unfortunately, these abstainers are part of the same, individual body and they too will be affected eventually by the action of the other cells. Let us take a peep at the wild, sexy titbits and see how HIV discards its protective condom and penetrates the accommodating host.

The studded structures of HIV are called gp120 and gp41 (figures 1 and 2). These names simply reflect their glyco-protein (gp) chemical nature. On the host T cells, there are two types of receptors that receive the HIV studs. One type of host receptor is the CD4 receptor mentioned earlier. Like many receptors, it extends from the inner aspect of the cell, through the cell wall or membrane to the external part of the cell. The other receptor on the host is called a chemokine receptor, CCR5. Chemokines are a family of proteins that primarily act as attractants.

To gain entry into the cells, one of the HIV studs, gp120, binds to the host CD4 receptor. This initial contact does not allow entry of the virus. The real, penetrative sex requires more negotiation, more courtship and more mutual stimulation. As the initial contact and signal transduction continue, they bring about an outstanding change in the HIV stud, gp120. The gp120 stud is now enticed by the attractant receptor on the host cell, CCR5, in addition to its initial contact with the host receptor, CD4.

With this two to one contact between the two receptors on the host and the gp120 stud, the second HIV stud, gp41, is charged into action. It springs outward towards the surface of the host to pierce it. The gp41 is the real stud. It is responsible for fusion with and penetration of the host. When it plunges itself through and beyond the outer confines of the host, the inner, naked virus loses its protective cover and is discharged into the compliant, submissive host. HIV infection begins.

If abstinence and being faithful to one partner fail, and you do not like to use condoms, you and HIV may have quite a lot in common. Considering that HIV does show some degree of cellular faithfulness and that other cells abstain from its sexual advances, your refusal to use a condom may be worse than the action of HIV itself.

Do not succumb to those charming ladies or gentlemen who, when you display a condom, look at you quizzically and say, with all the blessed assurance of a Luciferian angel, “Come, come my dear, just who do you really think I am? Let’s have some real sex.”
Posted by Dr. Lester CN Simon at 8:21 PM