The Civilizing of Racist White People

We are indeed at a crossroad in history. Racists whites have a simple choice: Either to continue to live in their false, alternative universe, or to come into the real world they have been running away from.

Make no mistake about it. Apologizing is relatively simple, as all school children know. Regarding the reasons for the criminal act and the false constructions you deliberately and wittingly put up to justify your crime, demands a refreshing act of civilizing that forces you literally to be “born again”, and in so doing to denounce that which you see in the mirror.

No wonder the Church has great difficulty here. It is the grand, all inclusive confession beyond and fundamental to all others. Indeed Revelation begets Genesis.

We must continue to hold that mirror of history and humanity up to them until and even after they can hold it up for themselves.

Mirrors must be the new public statues. Mirrors. Just mirrors.
Posted by Dr. Lester CN Simon at 5:52 PM No comments:


It’s been a long time some women don’t always want a man winking-up behind then at carnival time. Long garling time. I have known this since I was a little boy. With so many females in my family I didn’t have to peer like my friends to see and study them. Women were always in my face; on rising in the morning and at going to bed at night. And don’t talk about the many times I had to go outside to see why our dog was barking nonstop. Some wayfaring stranger fearing he would lose his whey for the night would be whistling to signal his coming. She was not going outside tonight. Carnival time.

It’s been a very long time that I have been watching women; big Christian women especially. Some of them were wont to carry my vulgar, wanton, cursing cousin’s name to granny. The way they retold the school-cursing story, that they didn’t witness, under the hill, when school was over, teachers out of sight, and nonfat dry milk powder all over the road, told me how much they wanted to be free like her. Carnival.

They waltzed through our unhinged gate with their equally unhinged minds, uninvited, as guardians of village morality. They staged up themselves in our yard like my Amazon cousin. Dead center. Sometimes to the left, near the sugar apple tree. One hand akimbo; the other at an obtuse angle in the air. Almost like flamenco dancers, before my granny. Even grandfather, Pythagoras, got up off his hypotenuse. These square ladies. These square ladies whom I thought knew only of square dancing. They wanted carnival.

They came to the picnic. They claimed they didn’t want to dance. So what on earth were they listening to the music for; and shaking your feet? They liked to watch. All day long they chatting chatting, chatting, drinking ginger beer, eating cake and sugar cake and licking ice cream; as if I didn’t see the aliquots of white run. And they had the nerve to send away poor little me to buy sweetie to suck away the scent. Three hundred and sixty five beaches and they don’t want to swim. They can’t swim. They just splashing water on their bodies, adjusting their bathing suits and asking each other if it’s tight, tight after getting wet. Carnival again.

And what about the tall, bespectacled elegant one; the parson’s sister? Remember that Sunday after church when she walked to the bus with her body in elliptical motion? Broke her shoe’s heel my foot. I couldn’t swear in church but I almost swore she deliberately prized off the heel. Any heel can break off just so and look so, and happen while she was sitting in church? She didn’t even go up for communion. At least she was honest. And she was even more honest at a funeral a few days after. Some longtime friend asked her how she looked so good, so happy and contented; and begged for a portion of her secret potion. She said it was her faith in the Lord. She should have stopped there. No. Funerals can resurrect the dying truth. She went on to say that everything was for Jesus. Now. Now. The good Lord must have plenty mercy for real father, to give to so many of us; and a sense of humour too. My little ears clean, clean, clean. I heard somebody whispered to somebody else that she was so right. Everything was indeed for Jesus for true. Apparently or reportedly, depending on if you saw or you heard, some young man ( not poor little me) was ravishing her night after night whilst she was bawling Jesus; Jesus. Jealousy is worse than witchcraft. And they want to stop the carnival.

This Jesus echo came to mind again many years later. Women must have a rabid sense of humour to endure some men. There I was, professionally, well really and truly professionally, and not alone, in the room of a prostitute that served as the blood collection area for taking samples from just under one hundred women of the night. Yes. I know. A dear friend said I should be careful with my preposition; although he had mistakenly said proposition. This hard work on a Sunday was in the early days of HIV. Never before or since have I seen a greater density of pictures of Jesus Christ on a wall. Jesus wept. Who were you going to call in remembrance? And I was so stupid to ask, as twilight descended and some early workmen ascended, why the light in the room was so dim. The bilingual female interpreter glanced quizzically as me. Dim-witted idiot. But I got one back. She didn’t get the pun on the tip of my tongue; sorry; on the tip of her bilingual tongue. Carnival again.

And what about those women who think it is their heavenly duty to harbour and berth deadbeat men who only come into port when the tide is high? Flooding their room with insipid water that stains up their frocks like dropping, dripping juice from hanging, concaving green bananas. It cannot be that half a man is better than no man at all. Will you continue to say this when you are halfway into your grave? Six foot distancing with a broken jar, a twisted nose, a black-eye, two black-eyes actually, a dislocated shoulder (again) and a knife cutting away thin slices of your life; free at last from his life, from your life and from the lives of your pickaninnies. Sometimes a woman just wants to breathe and not breed. You can’t stop the carnival.

This year we playing mask. Six feet apart is good distancing. She can wine-up in peace, finally. It’s a long time they planning this. I remember as a child seeing big, hard men dancing six inches, and closer, behind women and the women pushing them off. And instead, they calling poor little boys like me who revered them in the village. But now they were in town, dancing up. And when the little children suffered and did come on to them, they smiled, asking if this was the little boy for so and so that grew up so big. And they gone again; darling; darling. Carnival.

The things little children see and hear and believe. We really thought Mr. Benwood Dick was a lovely old gentleman with a bent wooden leg. Poor man, we thought. Our sister should help him across the road to his house. And what about the lady who was called Miss. Rounders. We thought she was really a good player of the game, rounders; until she quietly told her handy man to wet his hand and wait for her. Our English teacher had just taught us the meaning of homophones. So, was it wet or was it whet? The unbridled joys of being a handyman. Carnival come.

The word homophone was spoken very softly. Bright young children showing off was frowned upon. But we saw and heard everything. One lady was warned by another to be very watchful of her newfound lady friend, who was renowned for, among other things, cursing badly, with bad words to boot, in public, even on Sundays evenings, respectfully after the evening’s Gospel Hour program on radio. It was deftly suggested that if she and her new friend were to fall out, her so called friend would not hesitate to put her tongue on her. It is said but not written that at the reception of that warning, the lady’s cheek went from as black as a berry to as red as a cherry. Don’t stop the carnival.

Some men have sex on their mind all the time. All the time. They see sex when it’s not remotely present. Switching channels remotely; like a TV; if you get the TV drift. Their mind and body can stretch to near breaking point. Man goes into a pharmacy. At the cashier he sees all the sexual aids, extensions and supplements that will complement and compliment his performance. The cashier is simply doing her job, professionally, smiling and being courteous. He buys a pack of condom. He asks for two packs instead of one. She puts up two fingers to verify. He reads something in the two fingers that is totally absent. He thinks her two fingers are very far apart. Is this a signal? No. The music in the store is Air on a G string by Johann Sebastian Bach. Is this a signal? No. Her name is not Joanne. There is no sea in Sebastian. She is not coming back with you to Darkwood Beach for your carnival with the tropical air caressing her G string. Leave the woman alone. Don’t stop her carnival.

Some women just want to have fun. Plain, adult rated unadulterated fun, all by themselves. Six feet apart in this time of Covid-19, sanitized hands, playing mask, is perfectly fine for some of them. So please. Don’t stop the carnival.

And to think that everyone’s mitochondrial DNA is derived from the mother, who got hers from her mother ...ad infinitum...(whether you are male or female).

Take this back many genomic generations ab initio and it begs at least two questions:

3. Or even if Adam did come first, with his maternal mitochondrial DNA from God, was it the woman in God that sent Eve onto him? 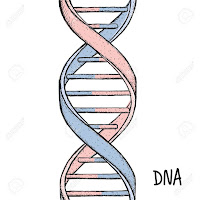 If DNA is the Father molecule and RNA is the Son molecule then the central dogma of molecular biology says that instructions from the Father can be transcribed onto the Son, the messenger, who can then by translation send that message onto us, proteins.

And if by reverse transcription the Son can become the Father, can we protein beings not only exist in the image of the Father but through his Son, inform the Father?

And if again, some 98.5 % of our genome is truly not involved in protein synthesis (and supposedly not involved in {“reverse”} protein prayer ) but rather that 80 % of this “dark genomic matter” is concerned with architectural planning, genomic blueprinting and regulation of the expression of the word of DNA, then heaven must be a place where most of the heavenly energy is expended not directly on us but indirectly on ensuring that heaven is in good, constitutive order, presumably for us.

And so, finally, if all of the above is true then the central dogma of our existence on this earth must surely be, not necessarily to pray incessantly but rather to use our “dark, latent, silent energy to ensure that like in heaven, our planning and blueprinting and regulation of life on earth is in constitutive tolerable order.

That then is truly heaven on earth!